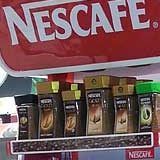 Our company has been addressed by its long-standing client, NESTLÉ company, and subsequently it has been chosen in tendering process as producer of a new type of permanent floor stand for products of the brand NESCAFÉ. As target place there are shops of independent retail market. The reason for competitive tendering was the need to develop new, modern POP stand, with sufficient sale and communication potential, which at the same time would be capable of domination in selling environment and it would support image and sale of the displayed coffee NESCAFÉ.

In the project, the attributes of our shoppercentric DAGO CIS (Complex In-store Solution) access have been reflected as usual. To get visual shape while creating design, we have been inspired by new communication feature of the brand NESCAFÉ, so called “square-round”, which dominates to the whole morphology of the stand and thus, it differentiates it in space from regular shapes of environment, what increases potential of attracting customers´ attention. For other support for dominance on the selling surface, we have used corporate combination of red and white colours.

NescaféThanks to the designed colourful code, the stand cannot be overlooked in contrast with dark and light background of the selling environment. Being part of the task, we laid stress on easy re-branding of the stand, which has been secured by means of exchangeable communication surfaces in front of the shelves, on sides of the stand and stoppers of action shelf. By value added of the stand, we also mean its adjustable and removable sideboards. In case of placement of the stands in a row of other displays, these sideboards have no justification and so they don´t have to be applied on the stand. Therefore our client – after analysis of placement – has saved substantial amount of finance. The stand also enables communication of news on highlighted action shelf and last but not least it allows easy application of the so called parasitic displays for action presentation of cross sell products.

By that, we achieve ability of the whole POP feature to convert potential customers to buyers of the exhibited range of goods. As a result of our victory in tender, we have not only designed, developed and produced the stands, but also we have distributed and installed them in shops throughout the whole Czech and Slovak Republics. In many places, this new display has substituted the original one, which has been withdrawn and eco-friendly eliminated afterwards. After all, this project has become another example of complex full service concept of POP project from its planning, strategic concept of design while designing, developing, producing up to implementation on market.