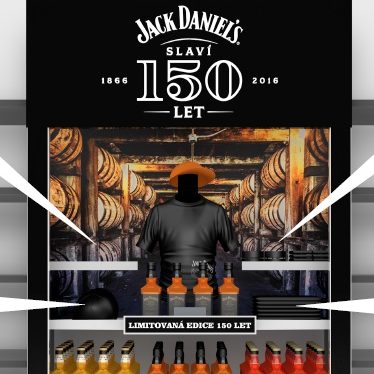 On the occasion of the 150th anniversary of the foundation of the first Jack Daniel´s distiller, the company Brown-Forman prepared for its customers a campaign with the limited edition of Jack Daniel´s whiskey and premium promotion articles. In the chain of Tesco stores, the company had ordered an installation of shelves evoking a cellar environment, where whiskey matures, together with a 3D figure drawing attention to merchandise products. Our DAGO team took charge of the realization of the display in co-operation with the agency POS Media.

‘’The purpose of the campaign was to draw attention to the anniversary of the foundation of Jack Daniel´s distiller, the oldest registered distiller in the U.S.A., and to lure customers effectively to a limited edition of the whiskey together with offering anniversary gift items of the same brand,“ says Tomas Ptacek from Brown-Forman. He adds that the main requirement for the realization was a premium design that will attract attention at first glance with its uniqueness, and thus it benefits not only sales but also the brand itself.

The result are attractive modules evoking an atmosphere of traditional distillery with the picture of wooden barrels on the back wall of the realization and with a dominant element of 3D figure directly inside the display and shelves for promotional articles. Author of the graphic design is Ondřej Balajka from FAJNÝ DIZAJN.

It is a realization which can get attention of customers and positively influence their mood very well with its original and premium design. We combined several materials in it as cardboard, plastic, paste-board, brushed aluminium and others.

Jack Daniel´s modules are waiting for customers in fifteen locations in Tesco stores all over the Czech Republic until the end of October.