We produce an adapter “Nakliku”. It minimizes virus transmission

Door handles are a place where large number of bacteria and harmful substances cumulate. So it is important for people to touch these places as little as possible. In cooperation with Tomas Bata University in Zlin, we have developed a special plastic adapter, thanks to which you can open doors with handles by your forearm. Due to the principle of its use, this invention is called “Nakliku”.

The Canon camera manufacturer sells its products in the Czech Republic as well as in more than two hundred other countries. It operates also in Slovenia looking for a way how to introduce its portfolio of printers and cameras to the public. Therefore, it has implemented a design promo-stall to support the displayed goods directly at the point of sale.

With Big Shock! to Dakar Rally

A competition for a ride in the truck, which participates in the world-famous Dakar Rally, is here! The Limited Edition of the Big Shock! energy drink, for which we have designed an end cap and a pallet island display, refers to this competition.

Two best realizations in POP STAR 2019 competition were ours

We regularly participate with our projects in the competition of the Místoprodeje.cz portal for the best in-store realization of the month and we are being successful in it. That is why we are pleased that we have succeeded within the overall assessment for 2019, as our displays won the first and the second positions in the POP STAR competition.

Customers can find the popular Irish whiskey Tullamore D.E.W. in new bars now. However, we are not talking about a bar in terms of a pub, we are talking about a pallet display we produced and placed into Czech and Slovak retail chains. The distributor of this whiskey, Mast-Jaegermeister, has presented a redesigned visual identity to attract a younger target audience. 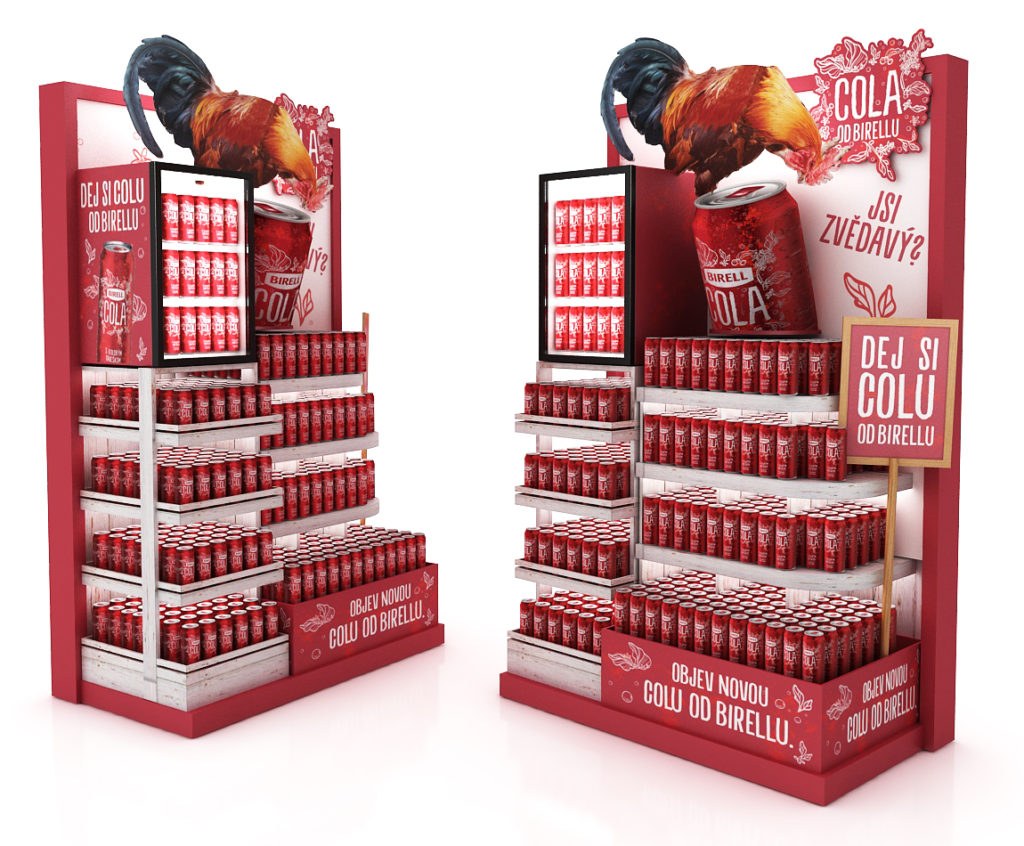 The first thing a customer will notice without a doubt on this end cap is the rooster standing on the can with the displayed drink and pecks at it. “The rooster has become a significant element of the entire campaign for Cola by Birell. We know that consumers are curious about the drink, and it is the rooster that symbolizes this curiosity. We used it in the television advertising and our digital campaign, so it was natural that we used the same motive here as well,“ explains Tomáš Krýsman, the Category Management Team Leader of Plzeňský Prazdroj, who produces Cola by Birell.

The moving rooster completes the exploration element, which we considered to be the main one. The end cap also attracts attention with its light processing. It is intended to acquaint shoppers with the new product and to support its sale, which is supported by its expressiveness and high visibility.

The rooster was originally supposed to be static
Customers will notice more of the dynamic elements, which is why the creators decided to make the animal moving. “Movement is not a common element in P.O.S. We were looking for a solution that would allow the movement to be driven continuously and without failures. Finally, we managed to find a technique that meets this requirement, and thanks to it, the rooster can peck for hours without stopping,” says Tomáš Krýsman. Passers-by are also encouraged to experiment and taste the promoted drink and the key visual.

We used laminated plastic, plastic elements, and cardboard to produce this end cap. Shoppers can also take advantage of a refrigerator, which cools the sold drink to the desired temperature so that people can refresh themselves immediately after the purchase. We have also incorporated a larger exhibition area into it, so the end cap will offer a large stock of products.

We have produced 18 pieces of these end caps. Now, it attracts customers in Tesco stores.