Christmas P.O.S. materials in the concept of different creators.

You will find these and many other realizations as always on DAGO Pinterest.

On 23rd November, there were announced the POPAI Awards for the best advertising means in the sphere of in-store communication for the year 2017. We won awards for six of our projects that evening. The most successful was o…

The deer origami from Jägermeister lures to the autumn atmosphere

For Jägermeister, the herbal liqueur brand, we have created an unconventional and attractive display with a deer „origami“. It is intended for the autumn action of the Czech stores of the Globus and Slovakian Metro chains….

Realizations and designs that have attracted us and could appeal to you as well.

These and many other worldwide POP inspirations can be continually found on DAGO Pinterest.

We support children and seniors

We are not alone in the world. It is human and natural to help others, especially to people who can´t help themselves. We, therefore, decided to contribute with 250,000 CZK to several projects this year that we think are ve…

Purina brand of food for animals of the company Nestlé celebrated the Day of Cats at the beginning of August this year. In Globus stores, we prepared original playful display, together with Nestlé, attracting to a long-term…

Nestlé case study: reflecting the buying behaviour is the key opportunity of the confectionery category growth.

Confectionery is a fixed star in shopping carts, but its producers have faced an important challenge in recent years: How to ensure a long-term and especially healthy growth for this category? In recent years, its sales hav…

In the category ”Drinks” of the prestigious European competition POPAI Awards Paris, we won a gold medal together with our client Kofola for the realization of a pallet island for the Rajec brand. Our other three projects w…

And again, we bring you some of the interesting realizations found on Pinterest. This time with the Christmas theme.
These realizations and many others can be found o…

25th Globalshop Las Vegas 2017 (www.globalshop.org) was organized in the spirit of “Experience Defines You”; so the customer experience was traditionally the priority.
Compared to Euroshop Düsseldorf, this U.S. Trade Fair w…

The JOJO realization won the POP STAR Award of February 2021 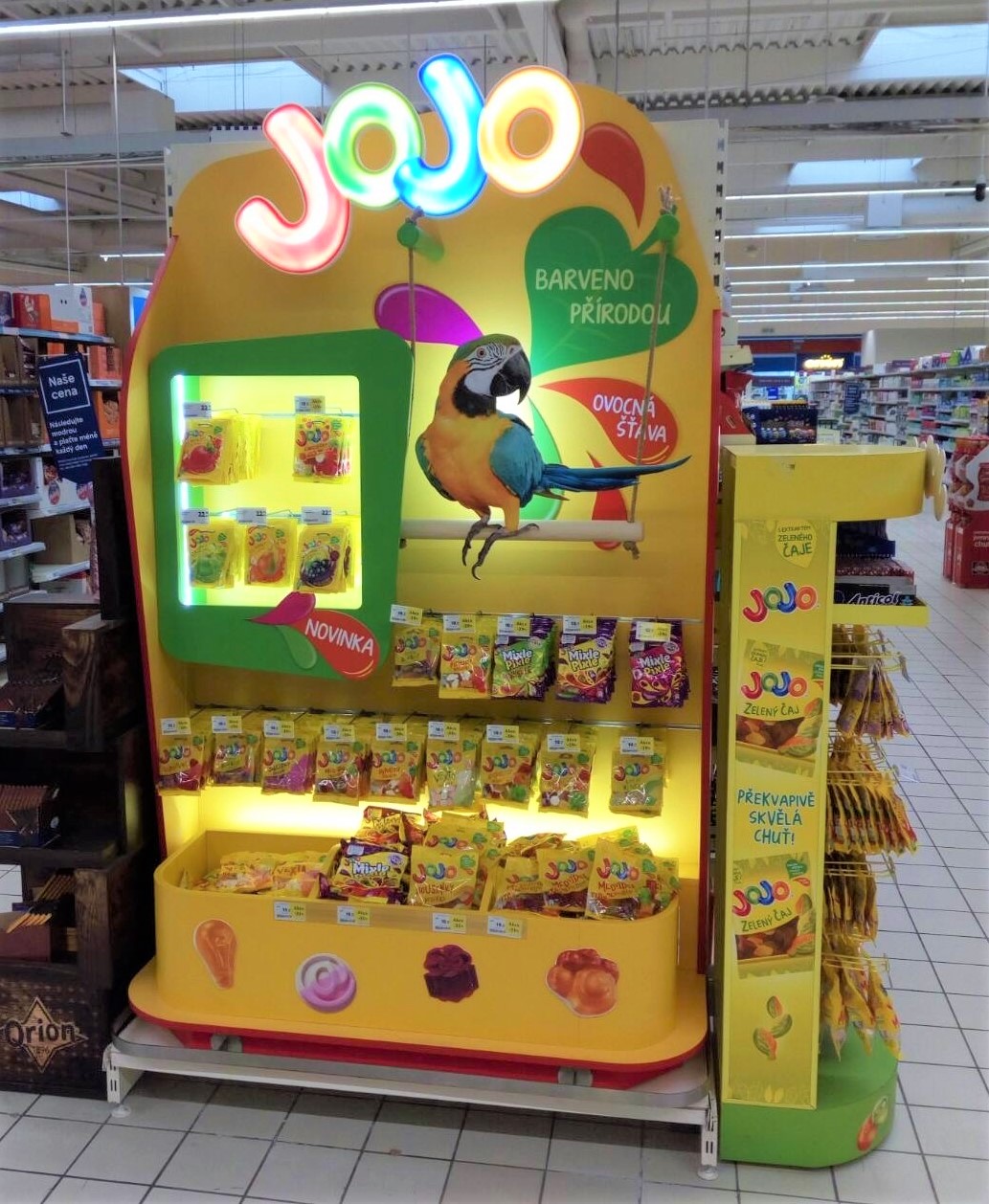 The Mistoprodeje.cz portal announces a new winner of the POP STAR competition. The winner for February was the realization of JoJo.

This month, 10 In-store realizations entered the competition, and the jury evaluated them again according to three following criteria: creative processing, overall production design, and the potential to attract attention at the point of sale.

In this round of the competition, the JoJo campaign won. The creative agency and implementer was the company Dago, s.r.o., and the client was the company Nestlé Česko s.r.o. This realization was exhibited in February within the Tesco retail chain.

An expert jury awarded the winning realization an overall rating of 7.93 points out of the maximum 10 points. In the category of creative processing, the realization received 7.5 points, in the overall production design, it received 8 points, and in the potential to attract attention at the point of sale, it was even 8.3 points.

For the first time in the history of the entire competition, we are also announcing the realizations that won the second and third positions.

A Pedro realization won the second position in the February round. The submitter and client of this realization, which was exhibited in the Albert retail chain, is The Candy Plus Sweet Factory s.r.o.

A realization of a four-palette display Stock Božkov Republica, customers could see in the Kaufland retail chain, won the bronze medal, and thus the third position. The client and submitter was the company STOCK Plzeň-Božkov s.r.o. The creative agency and implementer was the company Dago, s.r.o.

All the February competition realizations were evaluated by a jury of four people. The jury members were:
JUDr. Petr Majerik – the ex-director of several media agencies, representative of the University of Creative Communication, consultant for marketing and media; doc. PhDr. Jitka Vysekalová, Ph.D. – the President of the Czech Marketing Society (ČMS) and independent consultant in the field of market psychology, marketing communications, and qualitative market research; Václav Koukolíček – the External Communications Manager of TESCO Stores ČR for retail chains; and Ing. Alexandr Stojčev – the company Momentum Czech Republic, nominated for the AKA Activation Agency.

“Nice design, I appreciate the colorfulness, I’m just not sure about the selection of Bohemians candies :-),” says Václav Koukolíček from TESCO Stores ČR.

“A hundred times one can promise not to buy any sweets again, and then go to the store, see a similarly tempting display and again there are several packages of sweets in the basket,” says Alexandr Stojčev from Momentum Czech Republic. “It’s going to be pretty hard to lose weight like this … Visually great, hitting the target group too.“