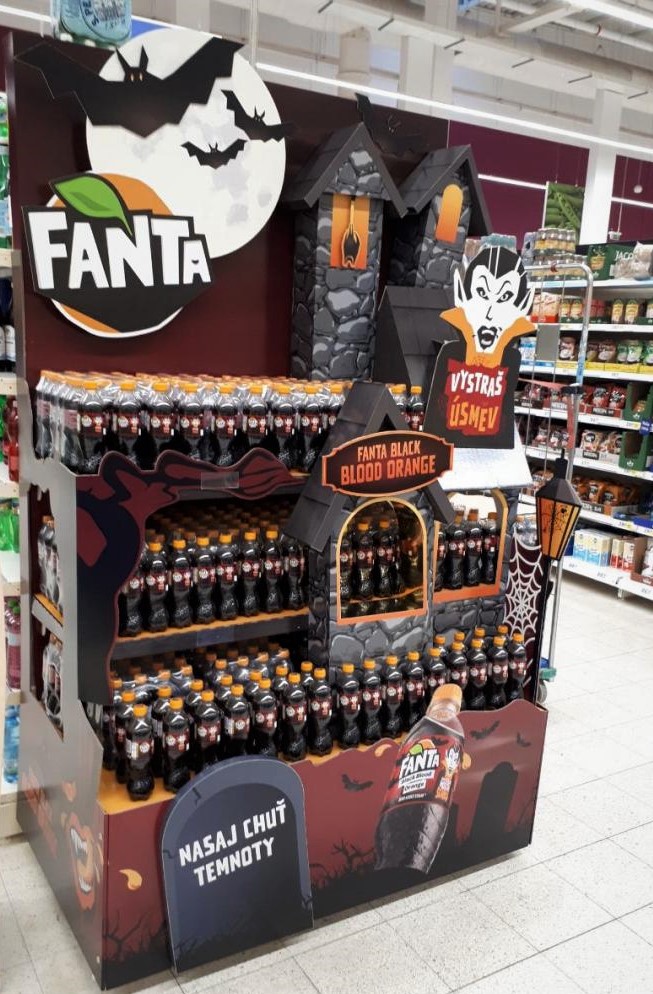 Halloween, the feast of all ghosts, is becoming more and more popular in the Czech Republic. Coca-Cola has introduced a limited edition of Fanta Black Blood Orange with a blood orange flavour that combines Halloween playfulness and craziness. We produced a distinctive scary display for this product.

Fanta Black Blood Orange beverage attracts primarily teenagers and their mothers. “This year´s mascot is the vampire Dracula, who, like hollowed-out pumpkins, is a symbol of Halloween. That is why we asked DAGO to create displays based on this global concept,” explains Katerina Triskova, the Fanta Brand Manager. Dracula´s castle became the dominant of the displays. We produced a total of about four hundred pieces that were deployed in Billa, Globus, Tesco and Albert stores. Some of them were also placed into smaller grocery stores that do not belong to any chain.

At the first glance, customers are captivated by the large figure of grinning Dracula with his castle in the background and a bat dangling in the castle tower. First we proposed a spider, but in the end we didn´t use it as it might scare too much. “Together with Dag, we incorporated well all the creative ideas. This was well reflected in the positive responses to the campaign we receive,” Katerina Triskova comments first responses.

The scary impression “touches” shoppers also thanks to the model of open wooden coffin. 3D elements have the disadvantage that they take up a lot of space within the display. We managed to put the coffin into the display so that it contains the exposed products in addition to producing an impressive effect, so we finally saved some space.

The big advantage of this set is the inexpensive design made of cardboard. It can be installed flexibly on shelves or end caps of various sizes. Each part is well elaborated in terms of construction and graphics, so they can be delivered to a store and cut on the spot as needed. The advantage for the client is bigger flexibility and lower costs.

Coca-Cola HB is one of our regular customers. We believe that our mutual strategic thinking and openness to unconventional solutions, as for example the combination of gloomy colours with a cheerful vampire character, have pushed the result forward compared to ordinary realizations. We are pleased that we could participate in this project.