DAGO HAS FOCUSED ON CARDBOARD, BUILDING-UP A NEW HALL IS BEING PREPARED

Last year, we recorded a 40% increase in turnover in cardboard projects.

Tullamore D.E.W. Honey was launched into the market last autumn.

In recent weeks, the Dago communication agency has carried out several realizations for the products of the Czech liqueur distillery “Palírna U Zeleného stromu”.

NEW EDGE: We present ourselves to the world of a new reality at a new level

What happened in the POS communication market during the pandemic crisis and why we are now stronger and more efficient.

Cheese from “Veselá kráva” and popular snacks “Sýr a Křup” attract the attention of almost all passers-by these days. Dago has created a new shop-in-shop for the company “BEL sýry”. 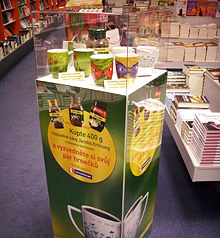 This month, our company has designed, produced and implemented for our client KRAFT FOODS, s.r.o. a set of integrated POP media in order to support consumer promo contest “Cups, which draw people closer” (www.jacobskronung.cz/hrnicky) happening from the 1st of July to the 31st of August 2012.

The promo action is taking place at selected retail chains in the Czech Republic and Slovakia and is being communicated through mass media as well as directly on point of purchase. The project is one of the examples of how to use synergy to the utmost from connection of above line and below line activities. Together with the client, our DAGO team has suggested, developed, subsequently produced and in shops installed a set of POP devices, which are aimed at presentation of competition prizes, unique cups with Jacobs logo, right at the place of sale with the goal to motivate customers to participate in the contest, as the case may be to buy coffee of the trademark Jacobs. High attraction rate for the customers is boosted first of all by physical presence of real cups on all implemented POP media. There have been implemented three types of POP communication devices: Shelfstoper – practical and effective POP medium, which marks the place in a shelf that is possible to find very easily in connection with other ongoing communication so you can buy afterwards the promoted product. The real cup has been applied into 3D shelfstoper so as to get a clear idea about the contest´s prize.

3D Pallet Corner – action POP medium, presenting the contest itself; in upper part there is a little showcase with a display of all types of cups (three pairs) including nameplates of the well-known artists, who designed the cups. You set the corner as a part of the complex decoration on the edge of the pallet stand; it has been devised in the way that it should allow free passage around the palette and off take of goods, but at the same time it would actively agitate customers against shopping routine and raise their interest by communication of impulses connected with benefits of the consumer contest.

The Floor Presentation Stand is the last but not least of the POP units, which also communicates the principle of the contest including display of real cups and it has been placed on the spot, where the winners can get their deserved prize: in particular bookstores and electrical supplies.