Christmas P.O.S. materials in the concept of different creators.

You will find these and many other realizations as always on DAGO Pinterest.

On 23rd November, there were announced the POPAI Awards for the best advertising means in the sphere of in-store communication for the year 2017. We won awards for six of our projects that evening. The most successful was o…

The deer origami from Jägermeister lures to the autumn atmosphere

For Jägermeister, the herbal liqueur brand, we have created an unconventional and attractive display with a deer „origami“. It is intended for the autumn action of the Czech stores of the Globus and Slovakian Metro chains….

Realizations and designs that have attracted us and could appeal to you as well.

These and many other worldwide POP inspirations can be continually found on DAGO Pinterest.

We support children and seniors

We are not alone in the world. It is human and natural to help others, especially to people who can´t help themselves. We, therefore, decided to contribute with 250,000 CZK to several projects this year that we think are ve…

Purina brand of food for animals of the company Nestlé celebrated the Day of Cats at the beginning of August this year. In Globus stores, we prepared original playful display, together with Nestlé, attracting to a long-term…

Nestlé case study: reflecting the buying behaviour is the key opportunity of the confectionery category growth.

Confectionery is a fixed star in shopping carts, but its producers have faced an important challenge in recent years: How to ensure a long-term and especially healthy growth for this category? In recent years, its sales hav…

In the category ”Drinks” of the prestigious European competition POPAI Awards Paris, we won a gold medal together with our client Kofola for the realization of a pallet island for the Rajec brand. Our other three projects w…

And again, we bring you some of the interesting realizations found on Pinterest. This time with the Christmas theme.
These realizations and many others can be found o…

25th Globalshop Las Vegas 2017 (www.globalshop.org) was organized in the spirit of “Experience Defines You”; so the customer experience was traditionally the priority.
Compared to Euroshop Düsseldorf, this U.S. Trade Fair w… 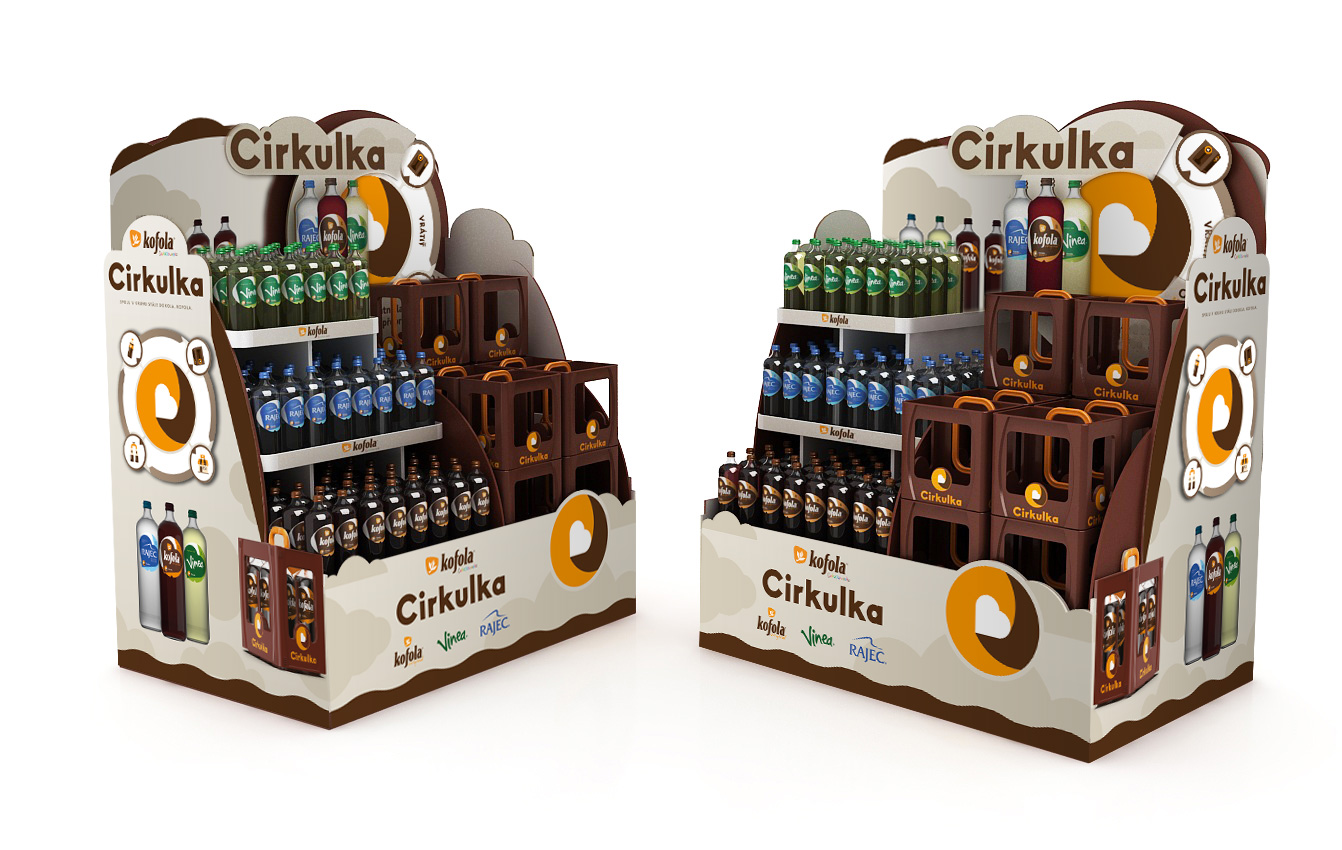 Kofola ČeskoSlovensko has introduced its traditional drinks Kofola, Vinea, and Rajec in returnable bottles to the retail network this year. It is another in a series of sustainable activities that prove that the company is not indifferent to the care of nature. In the case of “Cirkulka”, moreover, it did not focus only on the packaging itself, but also sustainable POS materials.

After several months of preparations, Kofola is coming up with the Cirkulka project, which offers a packaging alternative for all those who do not want to buy soft drinks in disposable packaging or are looking for sustainable solutions.

Kofola usually supplies returnable glass bottles to gastronomy. The online retailer Rohlík.cz and selected Tesco retail stores in the Czech Republic and Slovakia became a new distribution channel for returnable litre glass bottles. Just for these stores, the communication agency Dago, together with Kofola, prepared a POS display set created with a combination of honeycomb and cardboard. “We wanted to prepare a premium display for Cirkulka,” explains Daniela Dlouhá, Kofola’s Trade Marketing Manager. “We are glad that we, together with Dago, have managed to find a balance between creating the right educational visibility and, at the same time, combining it with an ecological approach.”

The display must maintain extreme loads

In the production of the display, we have considered the extreme loads that the displays have to withstand. The display is filled with litre glass bottles and empty crates, in which consumers can combine popular drinks from Kofola, Vinea, and Rajec. “The Cirkulka is a new way of packaging that consumers have to get used to. Unlike other innovations, it is crucial for it to communicate its story and the benefits it brings,” says Vojtěch Kolmaš, Kofola’s Senior Brand Manager, adding: “In addition to returnable packaging and recycled plastic crates, we also focused on POS materials.”

In order to meet the issue of sustainability, attention was also paid to the reduction of waste material, which was also supported by the use of FCS-certified cardboard supporting environmentally friendly, socially beneficial, and economically viable forest management.

In total, Dago produced 56 single-pallet displays intended only for Slovak stores, 12 pieces of grips in the size of a single pallet, and 7 two-pallet displays produced for the Czech retail market. A total of 3 two-pallet displays were decorated with Holofan, thanks to which Kofola’s circular novelty and the functioning of the entire bottle recycling process will also be presented in the 3D video. 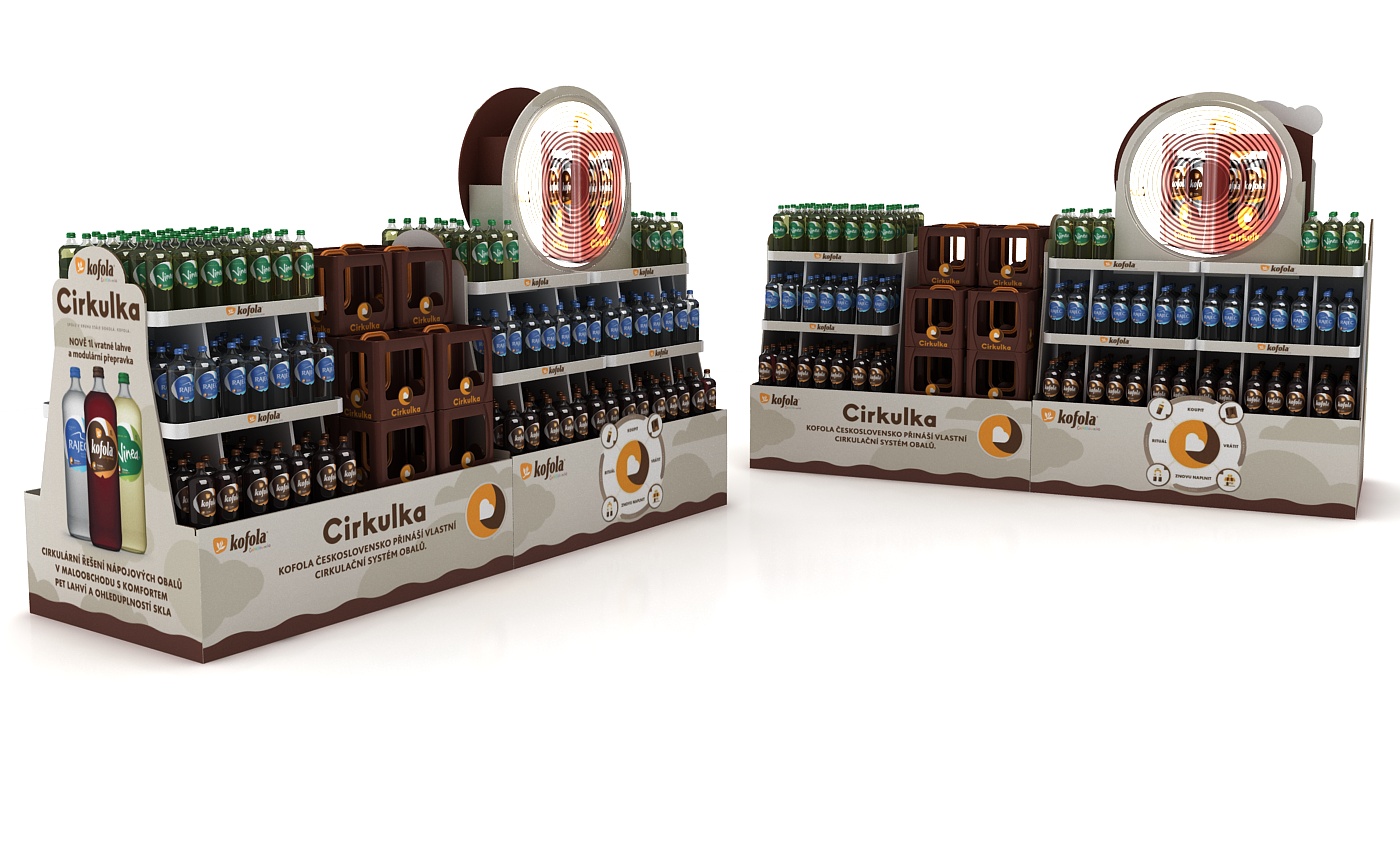